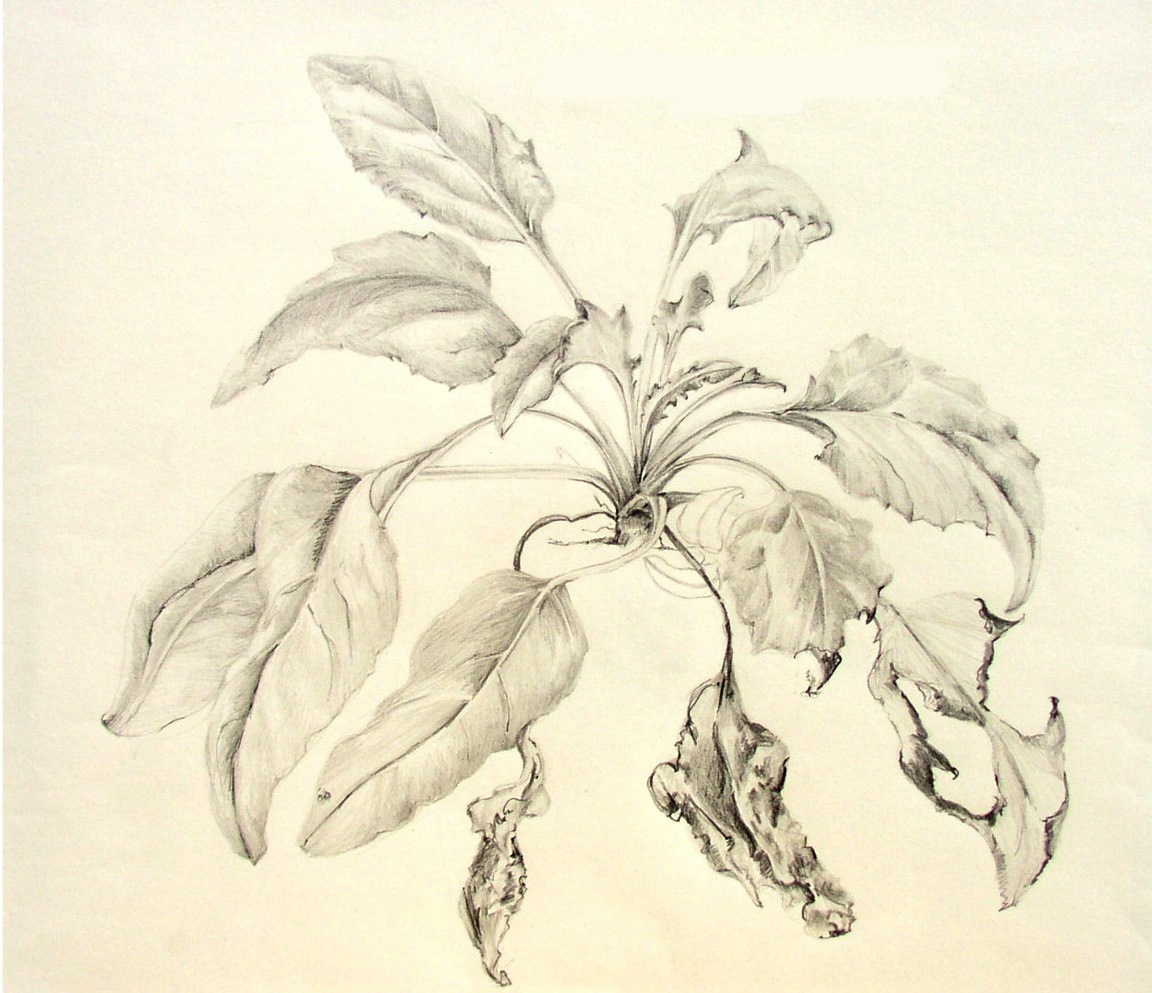 Share in my adventurous journey of finding the plants that are rare and endangered and creating their portraits. The biggest challenge is not only locating their natural or protected habitat and co-ordinating with people that can lead you to their sites, but to time your visit to capture the plant’s bloom. If possible, I return many times so that I can record the cycle of growth through to its seed production as well. It is illegal to remove the plants or any parts, so all documentation must be done on site and there is careful monitoring! Meet these people who take time out of their busy schedule to lead an artist to a solo plant; I hope my art measures up to their dedication to conservation!

Although widely cultivated, this plant is very rare in the wild and only known to exist in a few scattered locations around the hill country of Texas. In fact in the 1980’s it was believed to be extinct when a population in Kendall County was sighted by Marshall Enquist around 1987. Then on May 10, 2004, Bill Ward and Patty Pasztor were kayaking in the Cibolo Creek during high water and Patty noticed the distinct rosettes and dried stalks. Although other populations have been greatly reduced to a handful of plants, this population at Cibolo Creek is now protected and monitored by the Cibolo Nature Center and the current population is about 150 plants which is the largest known natural population. Reaching a height of five feet with deep burgundy-red tubular flowers, they cling to tall vertical cliffs sometimes growing horizontally over the creek below. Climb down with me!

Bill Ward, associated with the Cibolo Nature Center and the Native Plant Society, led us to its natural habitat.

Perspective of the Cibolo Creek and the rock cliffs. Yes, that is the cliff you are going to climb down!

January 2005, climbing down where the four-legged herbivores can’t go to munch on all the lovely plants.

My husband threw down my art supplies once we reached a small ledge and Bill is pointing out the hardy rosettes that are unveiling their new leaves. Careful not to step on any!

They are exploding out of small crevices in the limestone where they can grow undisturbed. Wonderful to see this vibrant green among the brown leaves and dormant ferns.

Bill is telling the story of the discovery of the stand, when the water was above that ledge! So, from their kayak they could see the dried stalks with the rosettes. This is what the dried stalk looks like that helped Patty identify the species. 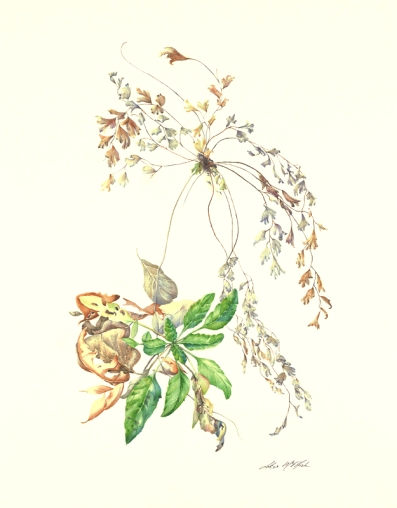 My sketch in pencil done on the cliff  in January and finished painting in watercolor later finished in my studio. 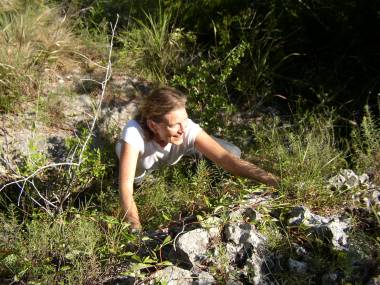 June 28th – climbing the same cliff only to find it overgrown with so much poison ivy that it seemed to be a companion plant to protect the Big Red Sage. Gingerly stepping on this same ledge and also finding fire ants! This time I could not sit and paint as I had in January.

Here is the speciman that I painted called “Big Red Sage in Winter” but this time with a robust poison ivy coming out of the same crevice! 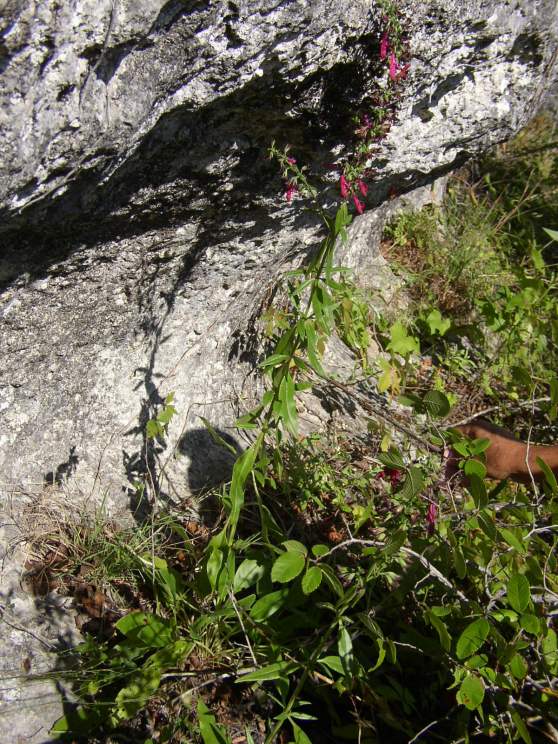 Pulling back poison ivy to get a picture of the blooming plant. They are majestically tall, some up to my shoulders. 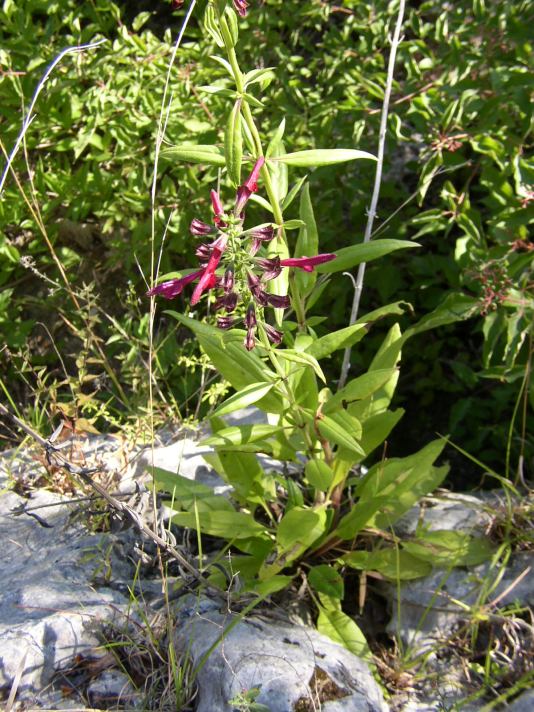 Here is a hardy plant. The tubular blooms are rich in shades of red, changing as the light moves, to purple, deep red, and violet.

Shooting horizontally from the cliff.

I took lots of pictures because I couldn’t set up here due to the heat, fire ants, and poison ivy!  Luckily, Bill told us of a research plot where 40 seeds were planted in a fenced area, where I could sit and paint for hours. He took us there next. 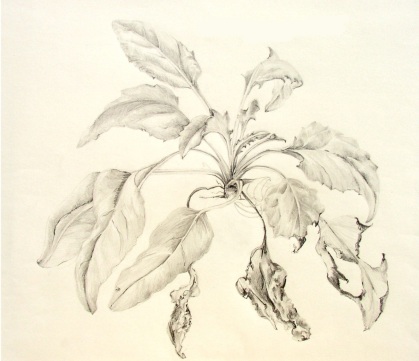 This is the one I choose for the “Big Red Sage Summer” portrait and I was able to sketch/document in the luxury of a shady cyprus near the creek inside the protected area at the Cibolo Center.  Later came back for the color studies.

Fall 2007, I was interview for the “Wildflower” (magazine of The Lady Bird Johnson Wildflower Center.  I was honored that it appeared in the fall issue that was dedicated as a tribute to Lady Bird Johnson after her passing sharing stories and  pictures from a life well-lived.  I thank her for bringing environmentalism to the national agenda and how she encouraged the beautification of Texas highway districts with native plants.

Learn, Give Thought, Be Inspired, Take Action……Bring Back Balance